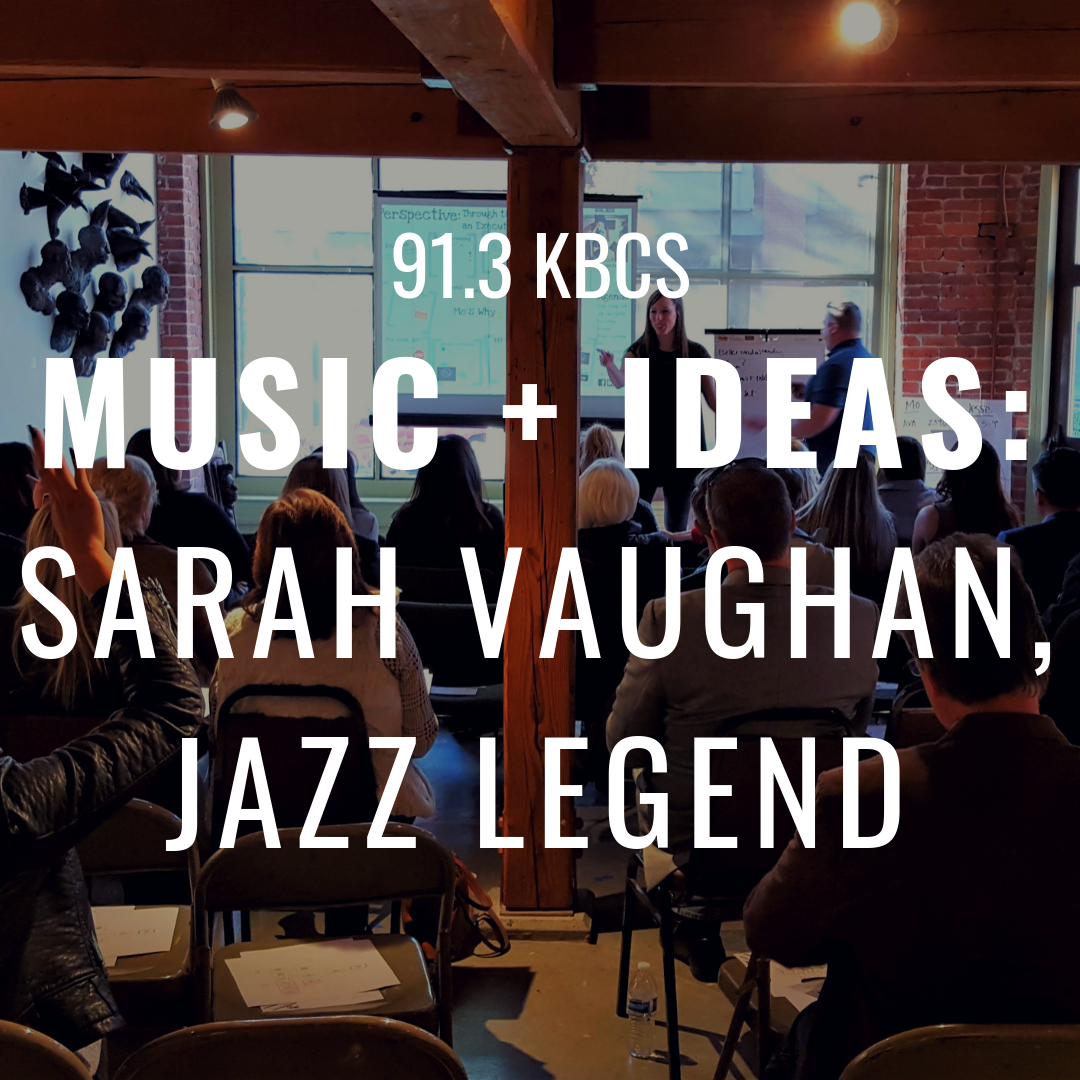 Join the Kirkland Arts Center and KBCS 91.3 in welcoming Earshot Jazz director and KBCS host, John Gilbreath, biographer Elaine Hayes, vocalist Gail Pettis, and pianist Darin Clendenin. John and Elaine will discuss the lifetime and career of American Jazz singer and winner of 4 Grammy Awards Sarah Vaughan. Gail and Darin will  perform a set inspired by Vaughan, a legend hailed as one of the most wondrous voices of the 20th Century.

Elaine has had a passion for music since her first piano lesson at age seven and has spent a dozen years studying big band “girl singers” and women in jazz. Not only does she find these incredible women inspirational, she loves delving into the past (yay for microfilm!) and finding those intriguing details that make the lives of these artists more real and vibrant. Along the way, she haz sifted through the collections of archives and libraries; received a doctorate in musicology from the University of Pennsylvania; taught multi-media courses in jazz, classical, and world music; spoken at national and international conferences; and discussed Sarah Vaughan on local and national radio, including NPR. All of this has come in handy in her most recent project: a biography of the vocalist Sarah Vaughan, titled Queen of Bebop: The Musical Lives of Sarah Vaughan, published by Ecco, an imprint of HarperCollins, in 2017.

Since 1991 John Gilbreath has successfully produced more than 2,300 concerts and public programs, including the well-respected Earshot Jazz Festivals, Seattle’s major annual jazz festival. Under his administration, the organization has greatly expanded its budget, programs, and audiences, while gaining international stature. He broadcasts six days a week on KBCS and KEXP radio, curates a jazz collection for a regional library, and programs other festivals and events in the region.

Named ” 2010 Northwest Vocalist of the Year,” by Earshot Jazz Society, (also 2007), Gail’s rich, warm vocals and understated phrasing have been described as “deliciously soulful” by Cadence Magazine. A native of Henderson, Kentucky, Gail grew up in Gary, Indiana. Along with her sister, Gail sang classical music and hymns at a local Presbyterian church and continued in other school and church choirs in later years. Initially drawn to follow in the family footsteps of healthcare delivery, she attended Ohio State University, Meharry Medical College School of Dentistry, completing an orthodontic residency program at Harvard University, after which she taught and practiced orthodontics full-time for the next 15 years, eventually moving to Seattle WA in 1996 by way of Memphis, TN. Gail spent her days chairside and her evenings with a newfound hobby of West Coast Swing dancing, having become attracted to this particular style of swing because it afforded the opportunity to respond to the music with a partner rather than only dancing through patterns. When an injury took her off the dance floor in 1996, she began looking for other creative outlets, including a jazz workshop led by Seattle saxophonist Darren Motamedy. In this class, Gail was delighted to discover within jazz similar opportunities to interact with the music and with fellow musicians. With Motamedy’s encouragement, she continued to pursue her new passion by participating in jam sessions and also through private study, eventually selling her orthodontic practice in 2006.

Darin Clendenin is recognized as one of the Northwest’s finest pianist and keyboard artists. Fluent in numerous styles of music, his stylish interpretations of everything from old classics to jazz standards, from classical to modern works enchant audiences everywhere. His performances, as well as his arranging and composing talents, are sought after for their artistry as well as their magical innovative mix of styles.